Hematopoiesis needs to be carefully monitored for its long-term efficacy and for changes caused by various environmental stresses, such as cytotoxic chemotherapy and pathogenic immunity. Hematopoietic stem cells (HSC) are the keystones of hematopoiesis through their multipotency, quiescence and self-renewing properties. These properties are strictly controlled by intrinsic and extrinsic mechanisms within specialized microenvironments located within the adult bone marrow (BM), called HSC niches. Since the emergence of the original concept of stem cell niches, by Schofield in 1978, in mice, two types of niches, the endosteal and the vascular niches, have been schematically described. The endosteal niches, mainly composed of osteoblasts (mesenchymal origin) and osteoclasts (hematopoietic origin), are suggested to maintain HSCs in quiescence and to participate in their SP/drug efflux functionality. The vascular niche, formed by endothelial cells, would correspond to a proliferative/differentiation compartment. More recently, the existence of a third perivascular mesenchymal niche, that would be the missing link between the endosteal and vascular niches, has been proposed. Lastly, the role of local sympathetic nerves and of Schwan cells as well as of Treg lymphocytes, as a sanctuary for stem cells from immune attack, has added further complexity to the cellular makeup of stem cell niches in BM and has enriched it with a new "neuro-immune" dimension. These different niches participate in HSC regulation through mutual interactions with stromal (MSC) and osteo-competent cells, adipocytes and endothelial cells (EC), diffusible factors (cytokines, chemokines..), extra-cellular matrix (ECM) components and environmental elements (O2 and Ca++ levels..) (cf. Figure 1). 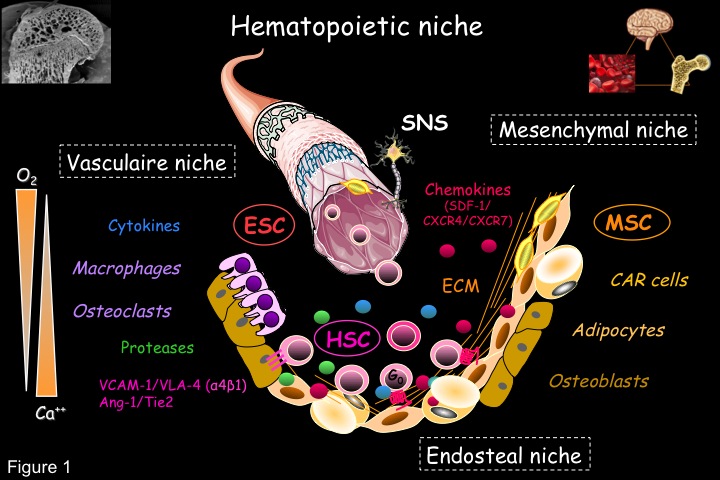 In this context, the thread of our project is to study the role of mutual interactions between stem cells and their niches in the regulation of human HSCs in physiology and in pathology with a cognitive and therapeutic objective (cf. Figure 2). 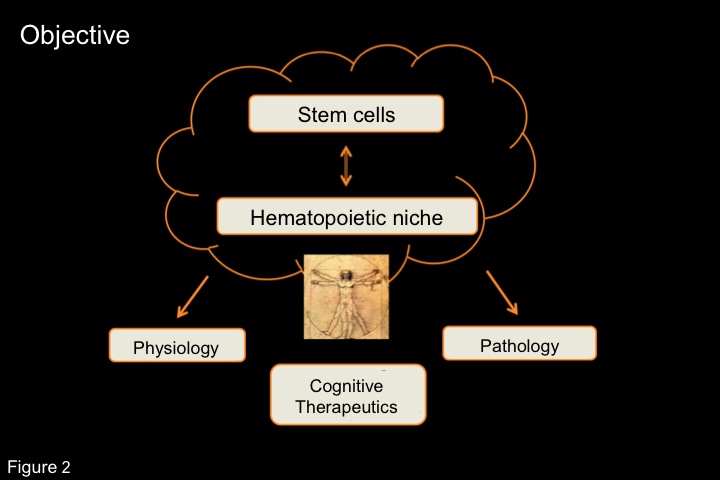 Actually, besides the crucial role of bone marrow niches in the maintain of hematopoietic homeostasis, their contribution to diseases in which hematopoiesis is either deregulated or delocalized in bone ectopic niches still remains poorly understood. Understanding interactions between HSCs and their niches and their role in the regulation of hematopoiesis will serve as a basis to study the mutual instructions between stem cells in other tissue/organ niches. This knowledge would improve clinical settings for the treatment of hemopathies and cancers, but also for a better stem cell engraftment/proliferation in tissue regeneration/repair processes.